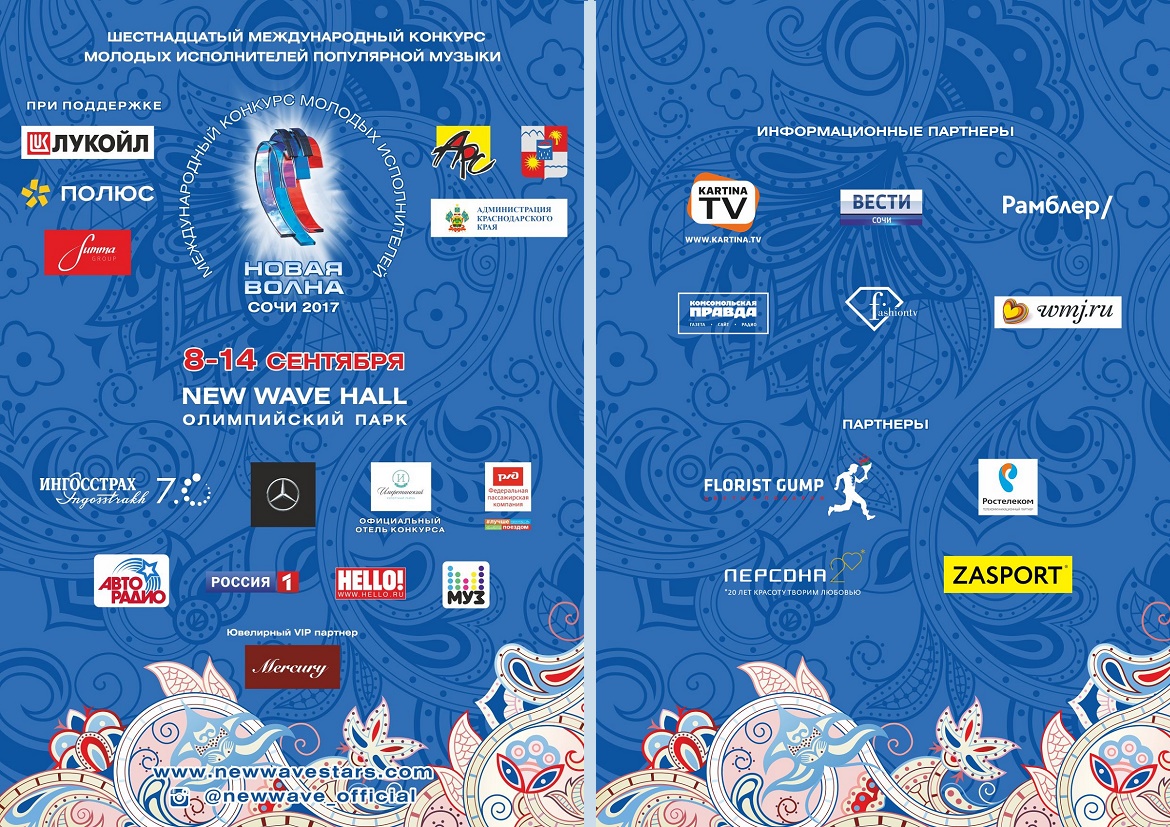 The ‘New Wave 2017’ International Contest of Young Pop Singers took place in Sochi from September, 8 to 14. 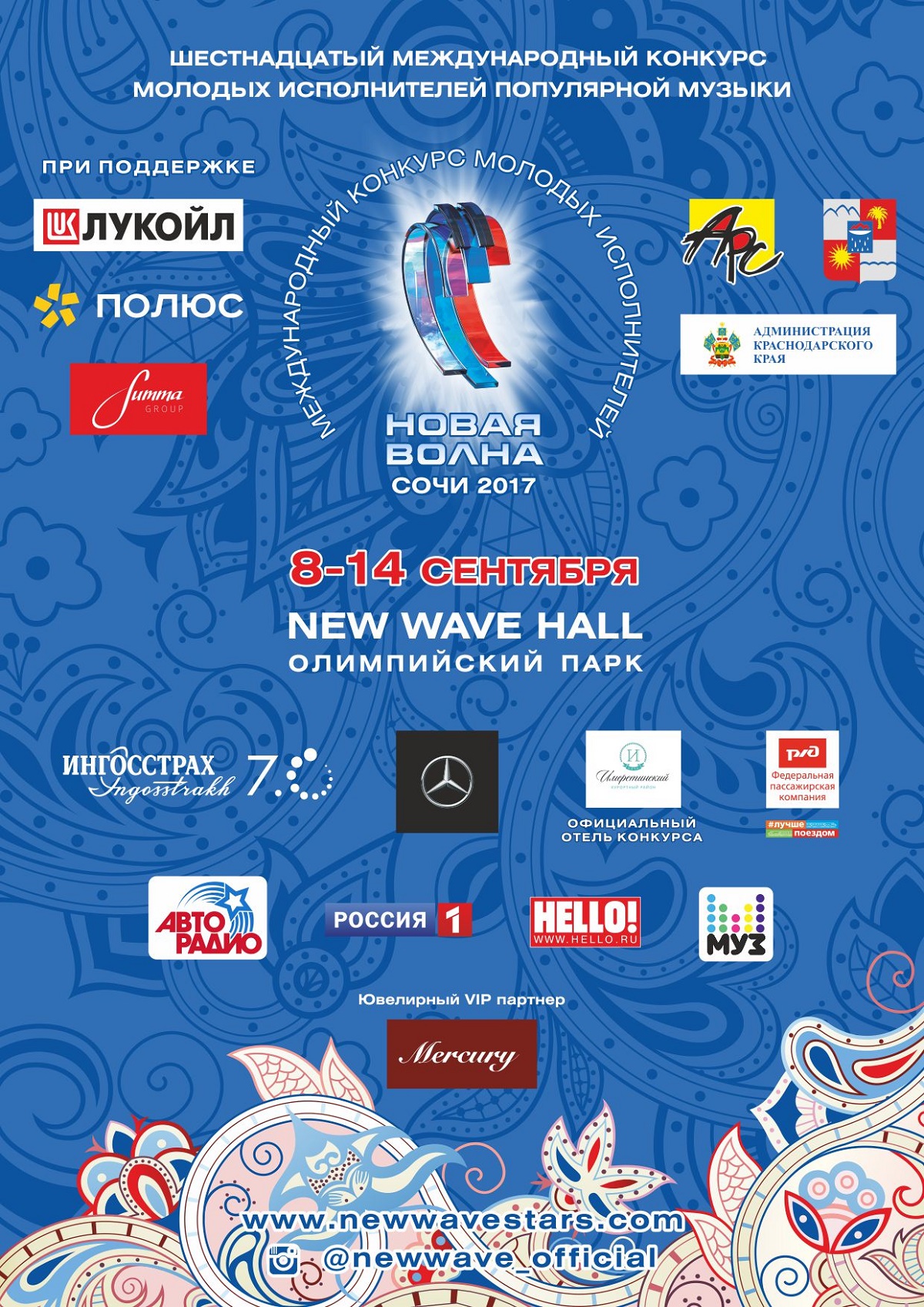 The main objective of the contest is to discover music talents and present them to the spectators. Such a major music forum is required to the countries where the issues of the modern music culture development are a priority. Every year the jury of the contest includes the most popular artists and musicians from Russia and other countries of the world. The Jury is permanently presided by the People’s Artist of Russia, producer and composer Igor Krutoy. Jury members: singer and composer Igor Nikolaev; composer and producer Konstantin Meladze; People’s Artist of Russia, composer and producer Filip Kirkorov; popular singer, actor, TV presenter Sergey Lazarev; popular singer, actress, Honored Artist of Russia Angelika Varum; popular composer Dimitris Kontopoulos; People’s Artist of the Republic of Tatarstan, singer Alsu; popular singer, musician and composer Intars Busulis; musician, producer, composer Anton Belyaev; CEO of the MUZ-TV Russian National Channel of Music Arman Davletiarov.

The contest has got long-lasting traditions which are dear both to the contestants, and the spectators and fans of the ‘New Wave’: live television audiences of the Russia 1 TV Channel amount to more than 200 million people. This shows how popular and well-recognized this event is.
Each year, from 2002 to 2014, the contest was staged in Latvian Jurmala.
In 2015, the ‘New Wave’ moved to Sochi and was staged here from October, 2 to October, 11 at the new Sea Port venue on the Northern Pier Square. Winners of the 2015 Contest were: First place – Damir Kedzo (Croatia, prize of 3.5 million rubles), second place was shared by Ademi (Kazakhstan, prize of 2.2 million rubles) and Millane Fernandez (Indonesia, prize of 2.2 million rubles), third place was taken by ‘The Pringlez’ Ukrainian group (prize of 1.3 million rubles). The Audience Choice Award was received by the contestant from Kazakhstan, Ademi. The Special Prize from the woman.ru web-site, the official Internet partner of the contest, according to the web-site visitors’ voting results was received by the participant from Armenia, Grigor Kekchyan. The Special Prize of the Yugra Bank, a music video production, was awarded to a young and promising performer from Russia, Kamila Izmailova.

The ‘New Wave 2016’ contest battle involved 16 finalists from 12 countries of the world. Winners of the 2016 Contest were: The first place was divided between Dino (Croatia) and Walter Ricci (Italy). The second place was taken by Galina Bezruk (Ukraine), the third place went to the Georgian contestant Georgi Nadibaidze. Winners of the first three places received bank cards with the award amount from the Yugra Bank. The Audience Choice Award and the Special Prize from the MUZ-TV Channel, which was rotation of the music video on the channel, went to Yesenia (Ukraine).

The ‘New Wave 2017’ was taking place at the Olympic Park at the New Wave Hall. The ‘New Wave 2017’ featured 14 contestants from 9 countries.
Drawing of lots for the Contest Days took place on September, 1:
11.00 a.m. School grounds in the Imeretinskaya Lowland (12a, Triumfalnaya Street, the Imeretinsky Resort, Sochi. Draw for the Contest Day 1)
3.00 p.m. The ‘Windows To Russia. Masterpieces Of Seven Generations’ Exhibition Pavilion (7, Parusnaya Street. Draw for the Contest Day 2)
7.00 p.m. The Big Sochi Dolphinarium (1, Yegorova Street, Riviera Park. Draw for the Contest Day 3)
Press-conferences with participation of the Chairman of the Jury, People’s Artist of Russia, composer, producer Igor Krutoy, People’s Artist of Russia, singer, producer Filip Kirkorov, CEO of Avtoradio Yuri Kostin, the head of the city of Sochi Anatoly Pakhomov, the ‘New Wave’ Contest CEO Alexander Rumyantsev were held on the opening and closing days of the Contest.
The International ‘New Wave’ Beach Soccer Cup was held on September, 11. Two teams, contestants and stars, participated in this event. The tournament was supported by ‘ZASport’ Company (www.za-group.net) by Anastasia Zadorina and KARTINA-TV and was held on the Imeretinsky Resort beach. The tournament was won by the stars’ team.
As part of the ‘New Wave’, the New Wave Fashion Week was held. September, 9. The Pullman Hotel. Anika Kerimova. The designer presented her new resort collection called the New Wave by Anika Kerimova, in which the emphasis is made on the nuances and originality of a lady on vacation. The color palette includes fashionable colors of the upcoming season, blue and red; floor-length flying silk dresses, stripe suits, dresses and wraps of lace, trouser suits and one-piece coveralls that are the hallmark of the fashion house, as well as chic evening gowns.
September, 11. The Vesna Hotel. Show of the American fashion designer Rubin Singer.
The passion for work of the American designer Rubin Singer can be explained by his Russian origin. His family has been involved in the fashion industry for many decades now. Some of his ideas for new masterpieces come from the Russian fashion trends and traditions. This is what makes his working style truly unique, Rubin offers women a combination of something that seems very familiar but at the same time very surprising to them. This is what attracts women who love to feel confident and, most importantly, to be unforgettable. Sometimes it may so happen that the art dresses by Singer can generate discussions and look totally unacceptable. Rubin intends to create an image of a confident woman who therefore likes to demonstrate her natural attractiveness. The women who decide to wear his dresses can for sure be real winners in any situation as well as conquer the world with their beauty. His every new collection does not only surprise the public with a new style. What is true is that every time he creates a big variety of images that are based on aesthetic sophistication and simplicity of forms. Sometimes he makes us accept changes in the fashion industry and start following new trends. Rubin has always liked to create something unique but he will never let this uniqueness go against his ideals and principles. He does always keep in mind that his dresses have to have strict lines and perfectly present the shape of a body. This is why his fans can easily recognize his dresses at any fashion show or a fashion event. This is the reason why such celebrities as Rihanna, Gwen Stefani, Jennifer Lopez, Sharon Stone and many others preferred to have dresses designed by Rubin Singer as they simply made all his rivals and supporters feel excited about his talent. The designer has got a great work experience; however, he continues to personally control production of the dresses at every step. This is what has led him to a great success and reasonably made him famous. On the one hand, the Rubin Singer brand tries to make a dress look very provocative but, on the other hand, it strictly follows all basic rules of designing clothes. It allows the designer to express his own view on fashion and show personal working techniques. Rubin is sure that it is impossible to create a masterpiece when one does not know the basics of the art. Thanks to his great professionalism he is able make clothes look unique while preserving its natural shape. Many people have a big desire to look attractive and feel confident by wearing fashionable clothes. And it is absolutely true that every person has a chance to express their personality regardless of what style he likes and how much he earns. He is able to do that through fashion. And professional designers are ready to offer their help. Rubin Singer creates unforgettable masterpieces which symbolize his uniqueness and imitable style. That is why the future professional life of this designer as well as his new collections will always shine in the fashion industry, because yet today Rubin is able to define fashion trends of the days to come.

The ‘New Wave’ prize fund amounting to 7 million rubles was shared among:
1st place – Sardor Milano (Uzbekistan), DoReDos group (Moldova), Erna Mir (Armenia)
2nd place – Syuzanna Melqonyan (Armenia)
3rd place – Lilu (Vietnam).
Audience Choice Award, the Diamond Wave, as well as the ‘New Wave’ watch by the famous Swiss brand Jacob & Co were awarded to Rustem Zhugunusov (Kazakhstan).
A Special Prize from the Russian Railways, a bonus card with 50,000 bonus points for comfortable traveling was awarded to Stas More (Russia). The prize was presented by Marina Zhegulina (head of the marketing division of the Federal Passenger Company JSC) and head of the Northwest branch of the company Mikhail Poyarkov.
Voting for the most stylish ‘New Wave 2017’ contestant has been taking place at the WMJ.ru portal for a month. As a result, typing more than 10 thousand votes, Lusia Chebotina (Russia) won this prize. At the final press conference, the Chief Editor of WMJ.ru Anna Kruglova handed a special prize to the winner. It was a certificate for professional photo session and interview which will be published in the website, as well as a certificate for the purchase of the Olympic fan uniform by ZASPORT.
Special Prize from MUZ-TV, rotation of a music video on the channel, was awarded to Sasha Santa by the MUZ-TV CEO Arman Davletiarov. Certificate for shooting the music video provided by the ‘New Wave’ Contest Organizing Committee. 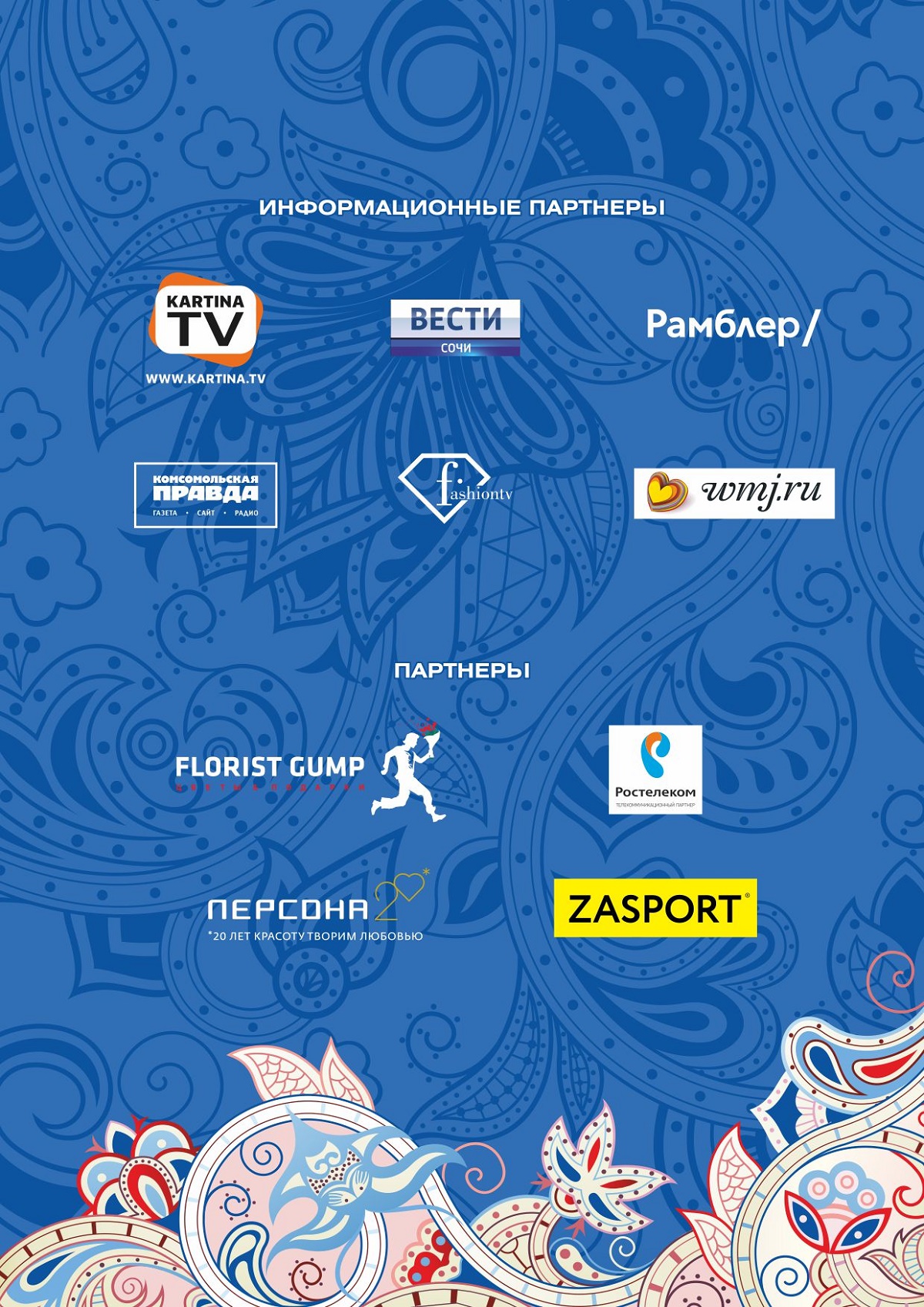